In a weedy lot on the outskirts of Memphis, two  boys watch a shiny Lincoln pull up to the  curb...Eleven-year-old Mark Sway and his younger brother  were sharing a forbidden cigarette when a chance  encounter with a suicidal lawyer left Mark knowing  a bloody and explosive secret: the whereabouts of  the most sought-after dead body in America. Now Mark is caught  between a legal system gone mad and a mob killer  desperate to cover up his crime. And his only ally is  a woman named Reggie Love, who has been a lawyer  for all of four years. Prosecutors are  willing to break all the rules to make Mark talk. The  mob will stop at nothing to keep him quiet. And  Reggie will do anything to protect her client --  even take a last, desperate gamble that could win  Mark his freedom... or cost them both their  lives. 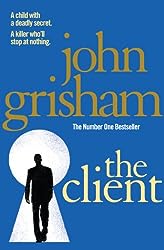 Films of The Client

This series was based on the book by John Grisham about Reggie Love, a lawyer, who just started her practice and is also a recovering alcoholic which was made into a movie starring Susan Sarandon. Now Jobeth Williams is playing the part of Reggie. Her adversary in the movie, Roy Foltrig is also there. Only their relationship is not as adversarial as it was in the movie. Reggie occasionally calls on Roy for help, and at other times drives him crazy with high standards of ethics. Also Reggie is trying to convince her ex-husband to allow her access to her children.

Mark Sway is an 11 year old boy who lives with his mother and brother in a trailer. One day he and his brother are hanging out when a car pulls over beside them. The driver then sticks a hose in his exhaust and puts the other end into the car. Mark pulls it out. But the man sees him and grabs him and takes inside the car. The man talks to Mark then later shoots himself. The shock sends Mark's brother into a catatonic state. The police question him and slips out some stuff that makes them think he's saying more than he knows. Roy Foltrigg, a prosecutor with political ambitions tells Mark he wants to talk to him tomorrow. Mark feeling that he needs a lawyer, sees Reggie Love. Mark tells her about the man who killed himself. Reggie tells him he's a mob lawyer. And one of his clients is a member of a mob family who is suspected of killing a Senator who was trying to take down his family. But because the Senator's body is missing, they can't prosecute him. Reggie thinks Foltrigg thinks the lawyer told Mark where the body is which is why he wants to speak to him. Mark goes to meet Roy and when he threatens him, Mark steps out then Reggie comes in with a recording of his conversation with Mark telling him that made several violations. In the meantime, the mobster is told by the head of the family to take care of Mark. So he threatens Mark. Mark doesn't know what to do and learns that Reggie has some secrets of her own and is uncertain if he can trust her.